This is a Wintec guide to help you with referencing in the American Psychological Association (APA) style.
Back APA Guide

What if I can't find the author of a source? 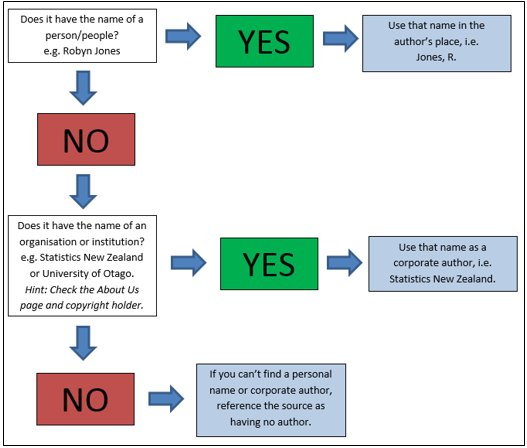 How do I reference a resource that lists no author?

Note: If you can't find the author of a source, consider using a different source as a source without an author may not be authoritative.

If I use OneSearch to find an article, how do I reference it?

1. If there is a DOI, use this in your reference.

2. If there is no DOI, use the name of the database the article comes from. This will be the specific database, and it is often named in the detailed record, e.g. in the example below, the retrieval statement would be: Retrieved from SocINDEX database. 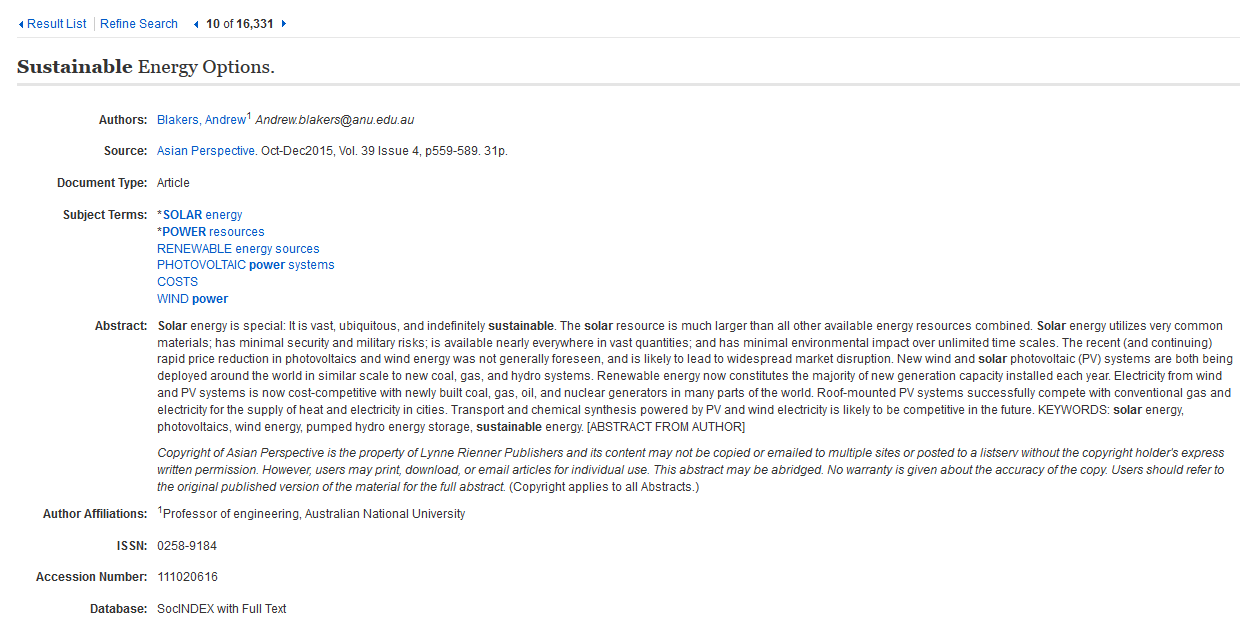 3. If there is no DOI and no database is named, use the URL of the publisher. You may be able to find this using Google, or another search engine.

Citing a long quote is similar to citing a short quote, except the formatting is slightly different. You need to:

Look at the example below:

Mentoring is an important aspect in nursing leadership.

So beginning nurses need to take advantage of the opportunities provided by their mentor.​

How do I cite someone quoted in another author's work (a secondary citation)?

This is called giving a citation from a secondary source.  Often an author quotes someone else.  For example, you are reading a book by Partridge and he uses a quote from a source by Crane. If you use the quote (or paraphrase it), your in-text citation will look like this:

In the reference list, you would only include the details of the book by Partridge, as that was the source that you looked at. If you think the in-text citation is too long (for example, when you are writing an assignment with a low word count), then you can look for Crane’s source and use that information in-text and in the reference list

How can I give multiple citations from the same source in one paragraph?

Putting an in-text citation after every sentence from one source is distracting. Instead, introduce the source early, then refer to the author by name or pronoun. If you use the author’s name as part of the narrative, you only need to put the year in parentheses once, at the start.  However, the year always needs to be included when the author’s name is in parentheses. For example:

Lazar (2006) describes several aspects of the data gathering process. He notes that the relevance and number of questions can affect participation rates. Lazar also found that . . .  (pp. 33-34).
Another important factor in the willingness of participants to complete the survey was the time of day that they were approached (Lazar, 2006, p. 35).

Note that tutors would not want you to paraphrase a whole paragraph in this way. Probably 2 or 3 sentences would be acceptable. It is also not good practice to paraphrase several pages into one sentence; rather break the ideas up so that they are easier for the reader to follow. Use three dots within a quote to indicate that you have omitted material from the original source, e. g. “This is the movement of the middle class . . . from schools serving low socio-economic status (SES) areas to schools serving middle SES areas” (Brett, 1994, p. 43).

How do I cite a summary or paraphrased passage from 2 or more texts in the same parentheses?

Where there is more than one source being referred to, list them alphabetically by the first author’s surname. Separate the citations with semi-colons. For example:

For APA referencing, the reference list at the end of your assignment needs to be single-spaced. Each reference needs to have a hanging indent with a single line spacing between each reference, as shown below:

How do I reference an eBook retrieved from Google Books?

These eBooks are freely available on the Internet. They should be referenced as follows:

How do I reference an eBook retrieved through the Library Catalogue?

An example from ProQuest eBook Central looks like this on the catalogue:

Clicking on the link takes you through to the following page:

Once you have opened the eBook, you will see in the ProQuest eBook Central logo in the top left hand corner. This indicates the collection this eBook comes from. This is only accessible by Wintec staff and students via login. A URL is therefore not given and the reference would be as follows:

Similarly, if it comes from the EBSCOhost eBook collection (in which case you wouldn’t see the ProQuest logo and it would say EBSCO on the catalogue or eBook Collection (EBSCOhost) when you click on the title in OneSearch), you would follow the same format but change the database name as follows:

The example below shows a link. When you click on the link you will be taken directly to to the book on the internet. 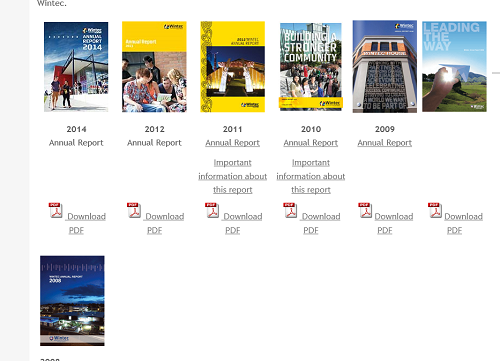 The reference is as follows:

If I search one database and it directs me to another database for the full-text, which database name do I put in my reference list?

You cite the database that the full-text is retrieved from, not the one originally searched.

For example, if you were searching EBSCOhost, and were directed through to ScienceDirect for the full- text, you would say Retrieved from ScienceDirect.

How do I reference and create appendices?

An appendix contains detailed, supporting information that would distract the reader and clutter the text if it were included in the body of the essay. Appendices contain material such as long lists, detailed descriptions, detailed statistics, transcripts of interviews, specification or data sheets and demographic data. Appendices appear at the end of the paper, after the reference list and figures and tables (if used).

In the centre of the top of the page write the label, e.g. Appendix A and the title. The text of the appendix follows - see example below. Note: The APA manual suggests paragraph 2 and all subsequent paragraphs should be indented, as this is the custom in the United States. In New Zealand we tend not to indent paragraphs, but write in block style. Check with your tutor as to which style you should use.

Objective: This lesson is intended to stimulate the students' interest and comprehension in reading by using a ghost story.

Warm-up: Students work in pairs. They are shown a picture of Berkley Square, a haunted place in the story. Students are given paper, and read it: The horror of Berkley Square. Underneath they write their ideas about what they think the story will be about.

After 10 minutes they are asked to read out their predictions. Any words that are related to the picture are written up on the board ...

Refer to the Appendix at the appropriate place in text, e.g.

In text citation:
You are allowed to state what kind of information the Appendix contains, if it provides clarification, e.g.

In addition to the limitations of email, Cummings et al (2002) reviewed studies that focuses on international bank employees and college students (see Appendix B for demographic information)...

If you refer to another author’s Appendix in your essay, it is also included in your reference list as follows:

The number of children attending school varies from island to island (Parker, 2011, p. 64).

How do I cite an introduction, preface, foreword, or afterword in a book?

These are portions of a book that are separate to the main chapters, and are often written by someone different from the main author(s) of the book, as in the examples below:

Preface, etc. from an edited book

In the past, “many attempts have been made to integrate television series and books” (Baldock, 1999, p. 12) with varying levels of success…

If the introduction/preface/foreword is written by the same person who wrote the rest of the book, reference it exactly as you would any other part of the book, e.g.

These are the “fundamental skills that bring about musical excellence” (Klickstein, 2009, p. v).

How do I cite a book that has been reprinted?

Note: If the book says it has been revised or updated, it is a new edition and you must use the date it was revised or updated. You should also include the information in the edition statement e.g. (Rev. ed.).

Where do I find the author's name for a chapter in an edited book?

These are often listed at the beginning of each chapter, such as in Jarvis' Physical examination & health assessment, and Kozier and Erb's fundamentals of nursing.

However, they may not appear in the chapters themselves, but may be listed in the contents page of the book. In Understanding pathophysiology, the authors listed on the title page are not in fact responsible for all the chapters in the book. In the contents pages, under each chapter title, the authors responsible for writing that chapter are listed. For example:

20. The structure and function of the musculoskeletal system, 475
Derek Nash

Another way authors may be listed is in the list of contributors. In Pillitteri's child and family health nursing in Australia and New Zealand, no authors are listed at the beginning of the chapters, or in the contents list, but there is a list of contributors, and under each it lists the chapter(s) they have written.

Sometimes contributors are listed with no attributed chapters. These do not need to be listed in the reference.

Refer to this table to see the rules that apply:

The order of the letters is determined by the alphabetised titles in the reference list.  It is NOT determined by which one you refer to first in-text. Thus, even if you mentioned his article on “Pre-conception checklist” first in your assignment, you would still refer to (Smith, 2011b, p. 33).

Can I put abbreviations/acronyms for corporate authors in in-text citations?

Yes, you can after the first citation. For example:

It’s not necessary to put the abbreviation after the corporate author’s name in the reference list; simply list it in full.

How do I find the URL of a journal's publisher?

​You will need to use the URL of an online journal's publisher if:​

From within the PDF 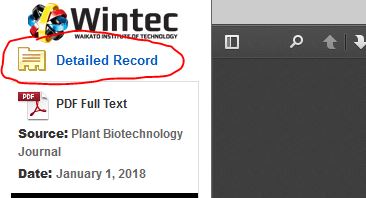 Once you are in the detailed record you need to go down to where it says "Source" and click on the link.

Then copy and past the URL next to "Publisher URL" into your reference.

In-text citations
Use the patent number and issue date.